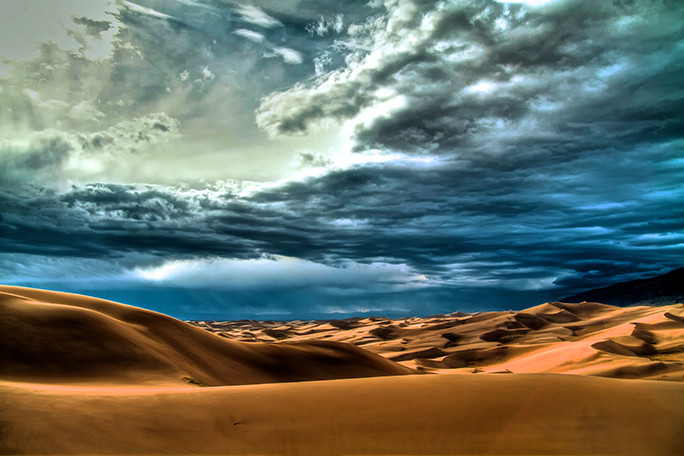 Here is a short story I wrote a few years ago. Just remembered I had it and thought I would share. I hope you enjoy!

Once upon a time there was a deep fissure far out in the desert. The poor fissure was sad, feeling empty and sorry for itself. Being split apart and wide open left him in painful anguish.

He hardly had any visitors and when he did, they saw him after it was too late, tripping in his emptiness and ending up injured. Their response was always the same: hurtful words and spit that muddied his dry dusty ridges.

He fought against nature as he attempted to close himself and cease to exist. But his attempts were futile.

His self-pity grew, drying the barren earth around him and increasing his size. He cried out in pain as the earth split further, tightening the curse of emptiness on him. Until he realized the cries he heard were not his own.

Waiting to hear the cry again, he waited as steady vibrations warned him of another coming visitor. His silent warnings were not heard in the delicate ears that approached. Soon a slender foot met him and twisted. Breath escaped the small frame that crashed near him and he tried to voice his concern until the visitor turned her tear streaked face back at him.

He froze as he watched the young woman grab her injured ankle and clench her teeth through the pain. He gawked at her beauty that hid under the desert dust upon her flushed cheeks.

She screamed through her teeth and suddenly paused with a jolt to scan the area around her. Noticing the fear burning in her eyes, the sad little fissure tried to hear what she had heard but could only focus on the gasps she tried to stifle.

Panic shot through her, the low snap of dry brush sent her past thinking and into flight. She held back a groan when her foot gave out on her and she tumbled over the little ledge and into the empty fissure. Struggling to right herself, she twisted and froze again when the sound of footsteps approached.

She lowered herself down until her breath caused small clouds of dust to raise from the fissures lonesome depths. The footsteps neared. Heavier than the woman’s had been and off balance. She pressed herself against the fissure. Holding her breath for as long as she could and shaking, releasing it.

The fissure suddenly realized the emptiness he had been feeling was gone. The woman’s warmth filled him with feelings he had never felt before. Her warmth was like nothing he had ever known. Different from the scorching heat the sun constantly beat down on him.

Her warmth, her presence was comforting, made him feel whole. Then he felt her tears. He knew them all too well. The pain and suffering that could only be released through tears that forced themselves free.

He knew them. Too many times he felt them trying to break free but the harsh desert never allowed their exposure. Now this woman, crying with no reserve, trembling from the fear that wracked her small frame, prayed as the footsteps loomed closer.

A rough voice growled and the woman shrieked.

Her scream sent tremors through the fissures walls and a heavy weight fell upon them. Arms flailed and nervously bitten nails flashed at the pursuers face. Her forced screams begged for help that did not exist.

The pursuer lifted himself up and she kicked him. He lost his balance, leaning over and catching himself on the burning desert floor.

She twisted away from him, crying against the pain shooting through her rebellious ankle and crawled the best she could away from the anger that awaited her.

The pursuer leapt from the fissures edge, pouncing his prey with a loud thump.

At this very moment the fissure watched in agony as the woman fought for her freedom. He was torn between the woman’s pain and his own. When she had left his depths, the emptiness returned with a vengeance. He had never known what it meant to be whole, to feel the warmth and comfort.

The woman screamed again, pulling him from the torture that pained him and back to the struggle just inches away. He was useless and insignificant. He couldn’t do anything to help her and he felt himself tear even wider.

With another loud growl the pursuer reached high in the air, a large jagged stone gripped tight with fury, smashed down. A sickening crack vanished in the deserts cruel vastness.

The woman moaned, low and almost inaudible. The pursuer’s hand rose again and fell faster than the first time. Bubbles of blood escaped the woman’s pale lips, sliding down her cheek and seeping into the dry earth.

The pursuer grumbled some incoherent obscenities. He tossed the rock from his hand and slammed his fists on the woman’s limp body. The fissure groaned as he felt the life slip from the woman. His depths ached, crying for the brief sense of wholeness he had felt with the woman.

To his side, the sound of boots scraping on sand made him gasp. The woman was carelessly kicked back to the fissure’s edge. Her fragile hand fell loose over his ledge and dangled before him. He reached for her. With every ounce of his being he wanted to bring her closer but it was impossible.

The miserable little fissure watched as the pursuer stalked off into the distance and the stillness rushed over him. He listened for the woman. Hoping to hear one more breath but it never came.

Soon the pursuer was back. An old shovel dragging behind him as he tripped over the low brush.

The fissure glared up at him the best he could and felt the anger rise as the pursuer stared down at the dead woman. With a sneer of his own, the pursuer spat at the woman and roughly kicked her to fall into the open fissure. The fissure’s beaten heart leapt with joy as she once again filled his emptiness and cured the loneliness that ate at him.

He sighed as her fading warmth seeped into his aching depths, and held her gently as the desert dirt rained over them.

When the pursuer was finished and the fissure’s crevices had been filled, he silently thanked him for the gift of the woman. He knew she had no life left and that she did not receive the love she needed, but as he now embraced her, his love consumed them both. He would not let go of her this time and would treasure her forever.